20 years of service to the children at IGF 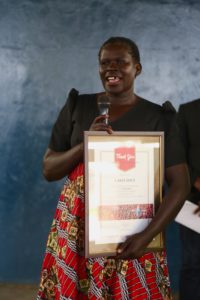 At the age of 21, Mama Lucy learnt about a white woman staying in Kitgum, and came to ask her to give her a job. It was 1997. In 2017, Mama Lucy was recognised and rewarded for 20 years of service to IGF and the children under Mama Irene’s care.

Lucy was a young single mother with a young baby, and was staying about 6km away from the school that Mama Irene had started. She came and asked for some work, any work. It was then that Mama Lucy started cooking for the children. She would wake up early each morning and walk to IGF, collect firewood and start cooking porridge. Each morning the children would come to IGF, Mama Irene would lead them in prayers, they would have porridge and start classes.

In 1999, Mama Lucy moved in the IGF resident children’s dormitory and became a house mother, while also cooking for the school children during the day. She was earning about 5,000 UGX ($AUD2) a week, less than $10 a month. She used this money to plant crops which she then sold to earn extra income. Lucy was also selling bricks at one point, and sold bricks to Mama Irene to build some of the classrooms that still stand at IGF. 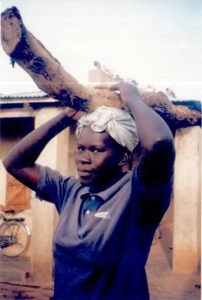 Mama Lucy never married, but she has two beautiful children. She worked very hard and earnt enough to send her eldest daughter through school, and has even built her own house which she moved into in 2013.
Lucy continued to support Mama Irene and work hard for her, even when others complained about little pay. “One day I had to do all the cooking for all of the children because the other cooks went on strike… at the end of the day Mama Irene gave me some extra money and told me to go and buy myself a soda” (Mama Lucy).

Mama Lucy is the Head Cook at IGF, responsible for feeding over 1,000 children at IGF’s main primary school. She was recently recognised and appreciated for her 20 years of service to Mama Irene, IGF and then children.