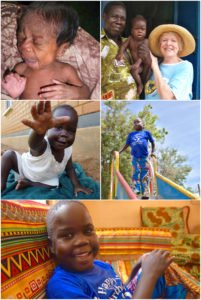 IGF first met Baby Walter at only a few days old in early 2012. He was born 2 months premature in a village not far from Kitgum, without medical assistance. His mother died while giving birth. He was brought to IGF at a few days old where his father Patrick looked after him in IGF’s Children’s Medical Centre. Everybody that visited IGF that year knew Baby Walter and his father. Patrick was such a devoted father and was known for his huge smile and caring nature. What made them standout even more was that it has been very uncommon in Acholi culture for a father to move into a medical facility to look after his child with such care and love. Normally it is an aunty or a grandmother that is sent to care for a child in that situation.

In late 2013, a healthy Baby Walter and his father returned home to their village. Walter was fit and strong and was walking on his own. They went home with food items, bedding and even a cow which had been purchased by a church in Australia. Walter, and his brother (who had been cared for by an aunty during this time), and his father resumed life on their land.
Fast forward to January 2017, and tragedy strikes Walter’s family again. His father died suddenly and tragically. Suddenly orphans, Walter (aged 5) and his brother (aged 7) were left were on their own. An aunty and uncle were giving them food when they had some to spare, but they were already looking after 7 children of their own plus another orphan child.

At the end of January, a team from IGF went to visit Walter and his father to see how they were doing. It was only when they arrived at the home that they learnt of Patrick’s death. It cant be described as anything other than God’s love and provision for these children, that the IGF team visited that day.

Walter and his brother were brought to IGF the following day by their aunty and uncle. They are both now receiving full-time residential care in the childrens’ dormitories and are attending school. Walter has begun in K1 nursery class, while his brother is in P3. The boys are both doing well and are adjusting to their new circumstances. For now, IGF is home.