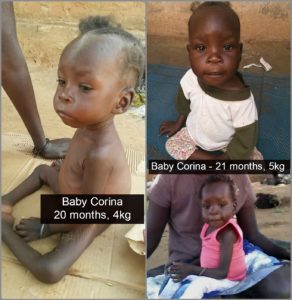 Corina weighed only 4kg at the age of 20 months when her mother brought her to IGF. She didn’t have a single piece of clothing, and sat on a small piece of cardboard on the ground. Her tiny body was frail, and her bones clearly visible through the skin.

Corina’s father died before she was born, and her mother has been suffering from a medical condition. Her mother felt desperate and not able to care for herself and Corina. Eventually she built up the determination to continue, and brought Corina to IGF for help. Corina’s mother has been receiving counselling and help to manage her own medical condition. Meanwhile, Corina receives feeding at IGF, together with clothes, bed sheets, soap, and the small things to help her grow and thrive.

After a month at IGF, Corina is starting to look brighter and more responsive. She has already gained weight and now weighs 5kg. Corina has a long road of recovery ahead of her, but she is already moving towards a brighter future.

Baby David has become an orphan at only 3 months old. His mother was killed in late January by a wounded buffalo outside a village in Northern Uganda. David was brought to IGF by a team from Ugandan Wildlife Authority, from Kidepo National Park.

David has been admitted in the Childrens’ Medical Centre at IGF. His eldest sister has come to stay with him and help look after him, but as she is only 15yrs old herself, she needs to continue at school. It’s a traumatic experience for everyone involved. David’s mother was killed on a Monday, her badly disfigured body buried the following day. The family tried to feed David with cow’s milk to get him through the first 2 days. Even as David arrived at IGF, the cow’s milk they had for him had curdled and he was hungry.

The remaining children were left behind in the village with their grandmother and uncle. The deceased single mother had 6 children, ranging in ages from 3 months to 15 years. Outreach to the remaining children followed to ensure that they would receive care within the family in the village. IGF does not seek to remove orphaned children from their extended family if they are able and willing to care for them. Maintaining those family connections is very important. David’s older sister is staying with him at IGF, and continuing with her schooling at IGF’s main school. Extended family members have travelled the 100+km to visit David and his sister at IGF, and the connection and relationship is encouraged and supported.

Baby David receives infant formula from IGF’s Childrens’ Medical Centre. As he is still so young, he receives the specialised formula for young infants. This formula is imported into Uganda, so the cost is quite high. It is understandable why families in northern Uganda are unable to care for infants if the mother has died. The cost of milk formula for 1 week, is almost the monthly wage of many low-skilled workers.

Please support IGF in changing the lives of these precious infants and babies. Donate online at https://irenegleesonfoundation.com/portfolio-view/childrensmedicalcentre/

Or email us to set up an ongoing monthly donation at: info@irenegleesonfoundation.com