Dumped by the river at 2 months old, now 4 years later… 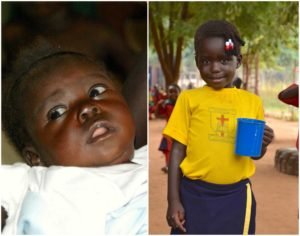 It is 4 years since Lagum joined the IGF family. At 2 months old she was dumped beside a river in Kitgum by her teenage mother. A police woman saw the baby left by the water’s edge and went to rescue her. She was brought to IGF for immediate care and feeding. Lagum was healthy and had no signs of medical concerns.

She was named ‘Lagum’ by IGF nurses, meaning that she is ‘blessed’. Her mother had dumped her by the river, but Lagum was rescued and was healthy.

Lagum’s young mother eventually came forward to admit that she was the mother that had abandoned her baby. The police brought her to IGF with the intention of her receiving counselling and reuniting her with her baby. But after a week she took off again, leaving Lagum behind. Lagum’s mother was HIV positive, a teenage mother, and there was no sign of Lagum’s father. The young girl’s own parents had already died of HIV, and she saw no future, no way to care for herself, or to care for Lagum. She was desperate and saw no other way.

Again, Lagum’s mother came back to IGF, but showed very little interest in caring for her baby, and it was not long until she had again disappeared. When police found her this time, she was taken to the Women’s Prison and charged with repeatedly abandoning her child. After a few months in the prison, Lagum’s mother was released as her health significantly deteriorated. She was HIV positive and her immune system was not strong enough to fight off infections. It wasn’t long after that she passed away.

Thankfully Lagum was born HIV-free, and did not contract the virus from her mother in the early months of breastfeeding. A permanent carer was employed to care for Lagum in IGF’s Children’s Medical Centre. That same carer has been looking after Lagum for the past 4 years.

After growing and developing through the nutritional feeding program, Lagum moved into the resident childrens’ dormitory, where she stays with her carer and other young children that had also been rescued and grew alongside her in the Children’s Medical Centre. This year Lagum progressed into K2 at IGF’s main Nursery School.

Lagum has been sponsored by an Australian supporter for the past 4 years, who met her a few months after she had arrived. This sponsorship has enabled IGF to provide nutrition, clothing, bedding, school supplies and all her needs as Lagum has grown.

From being dumped beside a river at 2 months old, Lagum’s world has significantly changed. She is ‘blessed’, just as her name says. Lagum will remain at IGF as she grows and attends school, likely until she is a young adult. IGF is the only ‘home’ that she has known.

You can support a child like Lagum through sponsorship, or by making a tax-deductible donation to our Health and Education Programs. Each child has a different story, a different background, but all just as important as each other.