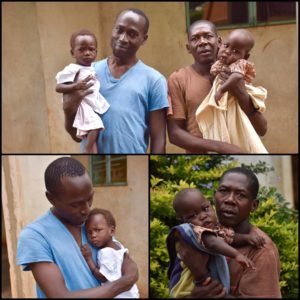 It is not common in the Acholi culture in Northern Uganda for a father to remain the sole care-giver of a young child. But these two men are breaking cultural traditions and providing care and love to their little ones in IGF’s Children’s Medical Centre.

Baby Tracey was abandoned by her mother in May this year and brought to IGF by relatives. Her mother was found by police and brought to IGF to be supported in caring for Tracey, but constant drinking and violence meant that she was a risk to Tracey and the other children and carers at IGF. The police intervened and removed Tracey’s mother from IGF. Tracey’s father came and has stayed to care for his 1 year old daughter. As a 34 year old Acholi man, well educated, and very well spoken English, Tracey’s father has left behind his garden of crops, his friends, and comforts of home, to stay in IGF’s Children’s Medical Centre and look after Baby Tracey. Most men of his age would find someone else to look after their child, or distance himself from the situation. But instead, he has stayed and shown Tracey the love and care that she deserves. He bathes her, feeds and clothes her, he sits with her telling her stories and provides the warmth and comfort to help her fall asleep at night. The bond between Baby Tracey and her father is incredible.

Baby Isaac has been under care with his father at IGF for over a year. His mother died after his birth and his father took on the role as his primary caregiver. An illness late last year resulted in the heartbreaking condition of cerebral palsy, and Isaac has required special care and attention since then. Still, Isaac’s father has stayed and continued caring for him. It’s a challenging situation for Baby Isaac’s father – a man from the bush, used to farming and growing crops, caring for his son that is suffering from cerebral palsy and has very little muscle control or coordination. Children with disabilities have often been abandoned, treated less than human, and not cared for in environments of extreme poverty. However, Baby Isaac’s father has stood firm and continues to care for and love his son.

It is incredible to see fathers standing against cultural traditions and being the sole caregivers of their young children. Instead of hiding from their responsibilities, these fathers have shown strength of character and a love for their children that is an example for all of us. We are incredibly proud of these fathers, and want to continue supporting them as they care for their children within IGF’s Children’s Medical Centre.