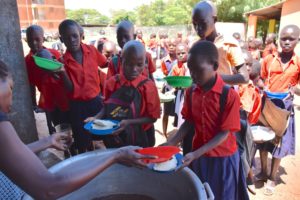 Increasing pressure and demand for food as draught and continuous flow of refugees into northern Uganda impact on food prices and availability in the region
The long dry season in Northern Uganda combined with the increased demand for food items to feed the thousands of South Sudanese refugees in Palabek, has pushed up the prices of basic items like sugar, maize, and beans, two or three times the normal price.

Since the 1st January 2017, 230,000 refugees escaping the violence and war in South Sudan have entered into refugee camps across Uganda. The UN Refugee Agency reported that since July 2016, an average of 2,077 South Sudanese refugees have arrived into Uganda every single day. That number of people fleeing their homes and fleeing for their lives each day is staggering. 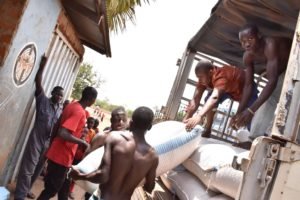 The refugee settlement camps spaced throughout the country range in size from 8,600 to 272,000 people. Most of them are women and children who have escaped the violence and dire conditions. Located 30km from Kitgum and IGF’s main primary school, and only 4km for IGF’s Palabek Primary School, the refugee settlement camp in Lamwo is in closest proximity to IGF. In one week alone (28th April – 04th May), the Lamwo settlement camp received 1650 new refugees, according to UNHCR. In June there were 8,600 people in this camp and increasing each day.

IGF’s Mighty Fire FM has been identified as one of the key sources of information for the refugees and also local communities surrounding the camps. It is used to desensitise the local community to the refugees, and also provides the refugees with basic information and even health education. With large groups of refugees that have left their homes and belongings behind, who have been through trauma, and now congregate together in large settlement camps, there is always potential for fear from the surrounding community, and also unrest within the camp. Mighty Fire has been engaging with Ugandan and South Sudanese, sharing messages of hope and God’s love. Health education programs teach of basic personal hygiene and the importance of controlling infections and diseases in a tight-knit settlement.

A challenging but not unexpected outcome has been the additional pressure placed on sourcing food items, and the increased costs of basic items. The long dry season in Northern Uganda combined with the increased need for food items, has pushed up the prices of basic things like sugar, maize, and beans, two or three times the normal price. Families in the local communities are struggling to afford basic food items, as USAid and the UNHCR purchase large supplies for the refugees. The cost of feeding at IGF primary schools has almost doubled in the space of just a few months. Beans and maize flour which the children eat twice daily, have become in short supply. The IGF nutrition program is vital to supporting families who are unable to feed children at home, and to keeping children in school and learning to their best ability. The significant increases in these food prices impacts on IGF’s ability to provide twice-daily meals to the most vulnerable children in the community.

It is hoped that the next season’s harvest will be bountiful and reduce the pressure. If you can support nutrition and feeding at IGF in the meantime, please donate online
or email info@irenegleesonfoundation.com for further information.