IGF purchase land in a move towards sustainability 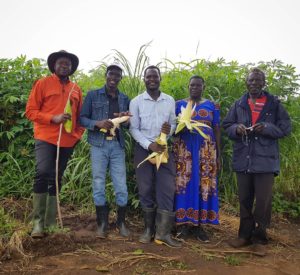 Feeding and providing nutrition was one of the very first ways that Mama Irene started caring for the children when she set up her caravan in Kitgum at the beginning of 1992. Every school day for the past 28 years, children in IGF’s nursery and primary schools have received 2 meals, breakfast and lunch. Without these meals at school, many of the children would remain hungry throughout the entire day, negatively impacting on their growth, learning and development.

In recent years though, it has become harder and harder to continue feeding the children each day, as prices of beans and maize have fluctuated significantly, sometimes tripling. There have even been times when there has been no maize available at any of the markets in Kitgum, as all suppliers and vendors have sold out.

Providing free meals at school remains an integral aspect to IGF’s education and nutrition programs. The children attending IGF schools are from disadvantaged families living in often severe poverty. One of the reasons that many parents choose to send their children to an IGF school is because of the meals, which help lighten the burden at home. However, as the costs of beans and maize continue to increase and fluctuate widely, it has become harder and harder to ensure adequate supplies to feed all of the children. It was clear that something needed to change.

Earlier this year, IGF embarked on a plan to purchase land, with the aim of becoming more sustainable through focused farming activities. The farm will enable IGF to grow our own food to feed our children at school. In cases of any surplus food above the needs of the schools, this could be sold to buy medicine for the school clinics, and milk and supplies for the infants in the Children’s Medical Centre.

The sustainability idea of farming was the primary focus for the entire 4 weeks fundraising tour in May and June when the team from Uganda came to Australia. By the end of June over 200 acres of land had been donated, plus funds to purchase a new tractor. A proposal to establish a piggery was also funded by an Australian family. By the end of August, 270 acres of land had been donated and a few more donations have since come in.

In August, IGF purchased 300 acres of land which is located 125km from IGF’s main centre in Kitgum. The choice of land was based on a number of factors, including rainfall, soil fertility, distance to market, legal security of ownership, among others. Although it might have been nice to have the farm in Kitgum, it was more important to ensure that the land would enable productive and successful farming now and into the future.

We are thrilled by the support we have received to start this farming project. Mama Irene taught us to develop and progress step-by-step, and for this reason we are starting small and developing gradually. Since the land was purchased in August, we were able to do a test crop of beans and maize on 15 acres (5% of the land). The result of the test crops has been great, with good rainfall enabling good growth. It has also provided some useful insights which will guide the planning for next season.

However, the tractor is still without vital implementation tools such as a plough, disc harrow, planter, trailer and so on. The team also needs support to plant maize, soy beans, coffee and bananas on 200 acres in the 2020 season. After the first two crops, the farm will be self-sustainable and continue to operate on proceeds from the first year.

We are incredibly grateful to all who have invested in the project to help IGF acquire the valuable resources, land and tractor. We ask for your continued support to help get the first crops in the ground, as in subsequent years the farm will sustain itself.   We are asking for a hand up, as we start to grow food to feed the children in our schools.