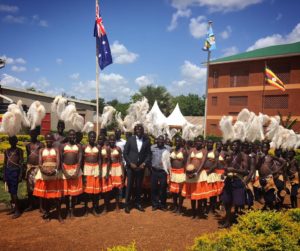 IGF’s Amida Primary School fell short by six points in defending their title in the Kitgum District Music, Dance and Drama festival that was hosted at IGF’s Christian Community Church on 11th August 2017.

Amida Primary School, who were the champions of 2016, emerged third among the thirteen schools representing their Sub counties in the District meet after qualifying as the overall winners (position one) from Labongo Amida Sub county.

The competition was under the theme “Improve school wash for better health so as to enhance inclusive learning and development of children”.

According to the MDD School Instructor, Mr. Ocan Patrick Cankura commitment of the pupils and availability of musical instruments made the festival successful.

Some of the pupils who participated in the festival were excited, they say it gives them a lot of opportunities.

“We are exposed to the different traditions and cultures in the Acholi region and Uganda at large”14-year-old Lamara Winnie of IGF’s Amida Primary School, said.

“We learn about what our parents used to do, which helps us in our everyday lives” explained Abwola Douglas, aged 14 years.

The Head Teacher at Amida, Mr. Okana Richard, said his School received 7 credits out of 9, obtaining between 80-100%. With three super merits in the areas of Royal Dance, Sight Singing and Traditional Folk song.

“This year, we have seen that the quality of the performance and skills of our pupils have greatly improved and this was a challenge to the adjudicators to pick the best choir,” Okana said.

The District Primary School’s Music, Dance and Drama Festival 2017 was organised by the Department of Education and Sports of Kitgum District.

Music, Dance and Drama festivals were created as a way to preserve and even revive, cultural forms in which Ugandans feel pride. The festival design allows children to utilise the stage as a forum effect social change, through presenting music and drama pieces depicting their lives and social challenges.
Well done Amida on a great performance. Next year we will win back the trophy!