Infants rescued despite covid-19 lock down 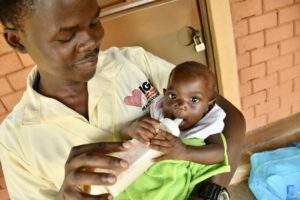 Baby Happy weighed only 4kg at 4 months old, when she first came to IGF at the end of June. When she was only 1 month old her mother died from unknown causes and she was left in the care of her aunty. Without any milk, Baby Happy hasn’t been receiving the vital nutrition she needs.  Already malnourished, she was at high risk if intervention wasn’t provided. After having routine medical checks, Baby Happy was admitted into IGF’s infant nutrition program and has been residing at IGF under the care of her aunty for the past 7 weeks.

Through the generosity of donors in Australia, we are able to provide Baby Happy with nutritional supplements and support her aunty in caring for her. Once Baby Happy is strong and healthy she will return home with her aunty.

At the end of July we received another infant, Baby Deborah. At 8 months old she was underweight and at risk of malnutrition. Baby Deborah unexpectedly lost her mother when she was only 2 weeks old, and her aunty stepped in to look after her. Without any breast milk or the ability to purchase infant formula, Baby Deborah has been fed on watery porridge. But after 8 months she hadn’t been gaining the weight that would be expected of a healthy baby. She was referred to IGF as the primary organisation in Kitgum providing nutritional support to at-risk and malnourished infants.

Each infant and their situation is assessed before being admitted to IGF’s infant nutrition program, and the most appropriate intervention is developed. As Baby Deborah has a loving and capable aunt to care for her, she is receiving nutrition support from IGF while she continues to live at home with her aunt.

It has been considerably more difficult for many mothers and also those caring for orphaned infants during the covid-19 lock down. Restrictions on movement have prevented some mothers from seeking medical attention, while others have struggled with lack of food and basic items to care for themselves and their children. We continue to provide much needed interventions through nutritional support and medical care to the most vulnerable infants. You can help by donating to ‘Childrens’ Medical Centre.’