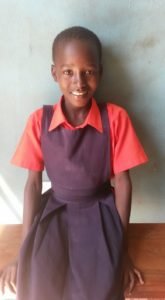 Jennifer stays at home with her brothers and sisters while her mother is away working for someone as a peasant farmer. Her mother is often away for weeks at a time, and Jennifer doesn’t know when she will be back again. When her mother is away, her elder sister is in charge. At 11 years old, Jennifer is in grade 5 at IGF’s main school. She is shy and quiet, and performing at about average in her class.

Jennifer’s father died when she was young, and her mother’s second husband was also killed after the birth of another child. It is only Jennifer, her 4 siblings and their mother. They used to live in a mud hut that was on land owned by Jennifer’s grandfather, but after he died they were forced out. They are now forced to rent a mud hut. Jennifer’s mother works away in a field digging and planting crops, trying to earn some little money to support her children. During the planting and harvesting seasons, her mother can be away for weeks at a time, only returning home briefly to check on the children before leaving again. She doesn’t have much choice but to leave the children and go to find work.

Jennifer has been attending IGF’s main primary school since she started school in grade 1. She is now in grade 5. She isn’t a high performer in class, but her teacher said that she works steadily and tries hard. Despite her mother being away working, Jennifer still attends school each day along with her siblings. Despite earning very little money, Jennifer’s mother tries to contribute a small amount to her schooling each term. She has told Jennifer to study hard and do the best she can. I think her mother is hoping that Jennifer will have a better life than she has had.

School provides security for Jennifer, a place where she is a child and can have fun with her friends. At home there are many jobs to do, and there is no guarantee that there will be enough food to eat. Homework also needs to be done before the sun goes down, as there is no electricity in a mud hut, and torches and lamps are saved for necessity.

Jennifer has had a sponsor since 2012 when she was in grade 1. Despite being shy, she has a huge smile on her face when she talks about her sponsor from Australia. She tells me that her sponsor sometimes sends her gifts in the mail, and short letters. She thinks of her sponsor like an aunty, and she said that she feels happy that someone is helping her go to school. Without having a sponsor, she doesn’t think that she would be able to go to school each day. Jennifer says that she would like to be a nurse so that she can help people that are sick. Although she is only young, I think she knows that she will need to work hard so that life is not the same struggle it is for her mother. On the outside Jennifer looks like a small shy child, but life has already shown her challenges and forced her to mature beyond her years. I ask her what she would want to say to her sponsor that has supported her all these years.. she smiles brightly and quietly says ‘thank you’.