Life without our parents is not easy, but we continue to push on.. Angee Babra Lucky 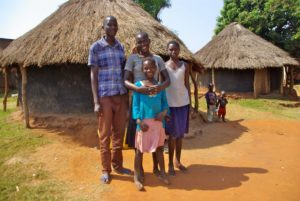 IGF provides support to many child-headed families. Many children have been left to fend for themselves after parents have died from HIV, diseases, or during the conflict of war.
Lucky (tallest girl) and her siblings were left orphaned after their parents died of HIV. Lucky graduated from P7 at IGF’s main school at the end of 2015 and is now studying at a nearby highschool. Through support from donors, Lucky and her siblings have access to education, and a future.
You might recognise Lucky from the IGF sponsorship video in late 2015, she wants to be the President. Lucky is one of seven children, of which only six have survived. In 2008 Lucky’s parents contracted HIV, and began taking ARVs (antiretroviral medication). However, her father feared medicine and refused to take it, eventually he became very weak and passed away. After his death, their grandfather came from the village and sold the land the children were staying on with their mother, and yet it was their father’s land. The children and their mother all moved back to the village. It wasn’t long until Lucky’s mother died in 2010, and the children were left as orphans.
After a difficult time in the village the children escaped and returned to Kitgum town, where they began to look for money for basic needs such as food and shelter. After the eldest sister got married, the other siblings stayed with them and worked on the weekends to make money to pay for school fees. Thankfully an aunty came and took the two youngest sisters and cared for them back in her village.
In 2015, Lucky and siblings were told to leave their sister’s house, as her husband could no longer support them. “That is when we became even more hopeless and worried in life” Lucky said. Already a student at IGF’s main school, Lucky shared her problems with someone at IGF, who was then able to provide support. Her two younger sisters returned from the village in January 2016 so they could all stay together again. “With some help from IGF, my three younger sisters are enrolled at the main IGF school”.
IGF schools are structured so that even children without sponsors have access to education, nutrition and medical care. Lucky did not have a sponsor during her primary education at IGF’s main school, but she benefitted from the method of Mama Irene, which means that unsponsored children are not turned away. One of Lucky’s younger sisters now has a sponsor, but the other two don’t. Through sponsoring one child, you are actually enabling another unsponsored child access to education, and a future. Please consider sponsoring a child today, and help IGF continue to support child-headed families!