Remembering Mama Irene on the 6th anniversary of her passing 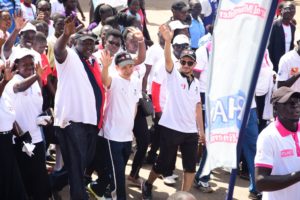 Each year in Kitgum around the 21st July, we honour the life and sacrifices of Mama Irene Gleeson. On the 19th and 20th July this year, thousands of people from across Uganda converged in Kitgum and participated in a variety of community events, including a charity walk. The annual Irene Gleeson Memorial Charity Walk raises funds in Uganda each year for a community based project in Kitgum District. We honour the sacrifices of Mama Irene, and follow her example in serving our local community.

This year the two-day memorial event included a variety of activities aimed at contributing to the local community and honouring the memory of Mama Irene. On Friday 19th July, IGF hosted a Youth Seminar with the theme ‘Empowering Youth for Transformational Leadership’. Up to 4,000 youth from high schools throughout the region heard from local and national pastors, including the retired Archbishop of the Church of Uganda, His Grace Henry Luke Orombi.

Friday also included the annual visit to the local hospitals in Kitgum to distribute gift packs donated by companies Riham and Movit, to the patients. Mama Irene used to visit the sick and weak in hospital and pray with them. To be able to follow by her example and visit the patients in their time of need, and give them something to ease their time in hospital, was a blessing to everyone involved.

There were also some fun events on Friday which drew huge crowds, including a 30km bicycle race and women’s and men’s soccer matches.

On Saturday 20th July, we held the annual Memorial Charity Walk, where thousands gathered to walk in memory of Mama Irene. While this was taking place in Kitgum, a group of friends walked in solidarity in Adelaide, South Australia. 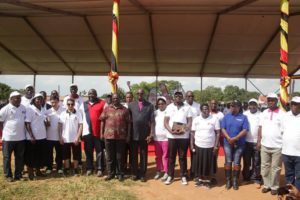 The Walk was followed by a Memorial Service, attended by Ugandan and international dignitaries, and people from throughout Uganda. It was a special day where people remembered the impact of Mama Irene in their lives, and committed to continue her legacy of improving the lives of vulnerable children and women in Northern Uganda.

It is 6 years since Mama Irene went to be with the Lord, by her memory lives on in the hearts and minds of everyone she touched.