Restoring the caravan that holds so much significance and history

Mama Irene’s caravan has always been a physical reminder of the journey, the strength, the faith that one woman had in leaving Australia and relocating to Kitgum, Northern Uganda. The caravan was packed in a shipping container in Australia in December 1991, and then towed 500km from Kampala to Kitgum. It was during the war that was ravaging the district; when men were being killed, children abducted and turned into soldiers, and the community left with widows and orphans struggling to survive.

Mama Irene arrived with her caravan all those years ago and parked it under a tree. She lived in the caravan for many years, and it featured throughout her autobiography ‘Heart of a Lioness’.   The caravan stayed in the same spot under the tree for over 20 years. 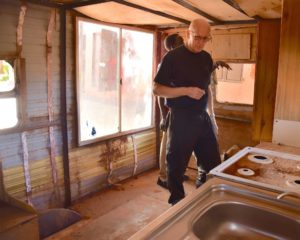 In late-September/October this year, Tony Mills (a volunteer from Australia) came to Kitgum to rebuild and restore Mama Irene’s caravan. Tony and his wife Ros learnt about Mama Irene and her story while staying in a caravan park in 2011. It was while they were on holidays in their own caravan that they met other friends of Mama Irene who shared with them about the Irene Gleeson Foundation.

Tony undertook 30 days of hard work and dedication throughout late-September/October to rebuild and restore the integrity of Mama Irene’s caravan. “IGF’s story begins in this caravan, Mama Irene lived here for quite some time. I am privileged and honored to work on helping to rebuild it, and restore it for the future”, said Tony. 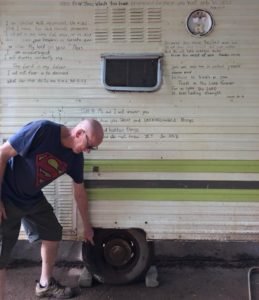 While all of her writings on the outside of the caravan were preserved, some of her writings will be put back inside the caravan. Those who followed Mama Irene’s story and read her autobiography ‘Heart of Lioness’ can connect with the miraculous inscription above her bed “My beloved is mine, and I am His”…

The restored caravan remains a reminder and a symbol. It has been moved for the first time in over 20 years (only a few meters from its original spot) and will be protected from the harsh elements by a newly constructed shelter.

Now many children, the community and visitors who never met Mama Irene will see and hear stories of her sacrifice, love and courage.