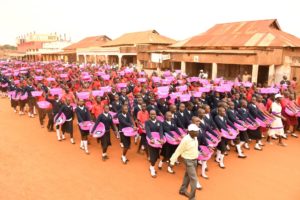 This year marked 5 years since our beloved Mama Irene went to be with the Lord. On the 20th and 21st July, thousands of people from across Uganda and even internationally, came together in Kitgum to pay honour to this great woman.

Many activities were held over the 2 days, and it was a great opportunity for people to come together and share or learn about Mama Irene and her great work and love.
On the first day, teams of school children and volunteers visited the local hospitals and prison, taking gift hampers to the patients and inmates. Each patient received a basin for washing, simple items like soap and sugar, and a Bible. Two large companies in Uganda also became involved and contributed to the gift packs. The teams distributed the gifts and prayed with each of the patients. The gratitude and joy was beyond what could have been expected. Mama Irene spent many many hours in the hospitals and prison in Kitgum, praying with the sick and the imprisoned. She set a very good example for us all. 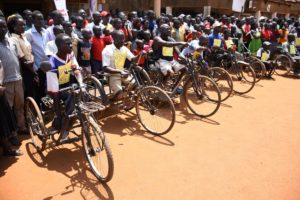 Saturday 21st July was the major event that thousands had gathered for – the charity walk and memorial service. The Chief Walker for this year was the Australian High Commissioner to East Africa, Her Excellency Alison Chartres, who had travelled from Nairobi, Kenya, especially for 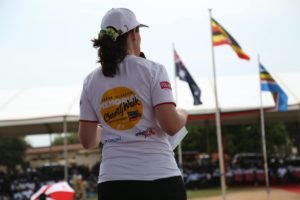 the event. The Chief Guest for the memorial service was the Speaker of Parliament for the Republic of Uganda, Rt Hon Rebecca

Kadega. It was fitting that two of the highest women in Uganda and Australia were present to pay tribute to another incredible woman, Mama Irene. A long-term friend and supporter of Mama Irene, Ugandan Foreign Affairs Minister, Hon Oryem Okello, was also in attendance with his family and spoke of her great work and legacy.

Thousands of people walked together through Kitgum, and then gathered in a field where the memorial service took place. Students from IGF’s Amida primary school performed a traditional dance to entertain the crowd, before Romeo Odong (who previously visited Australia with IGF team) got everybody clapping and dancing.

It was a wonderful event which was attended by thousands of people from across Uganda and even internationally. Many people had never met Mama Irene, but they have been inspired by the testimonies and the fruits of her efforts. Her legacy continues.