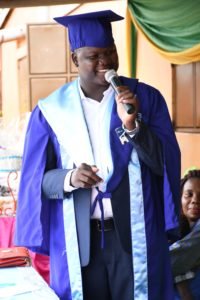 Walter was a born into a family of 10 children, in a small village between Kitgum and Gulu. His parents were poor and struggled to provide for him and his siblings (only 7 survived). When he was 8 years old, Walter was sent to live with his Aunty in Kitgum so that he could attend a ‘town’ school.

Walter started attending IGF’s main school in Kitgum town, and stayed with his aunty who had a small stall selling vegetables in a market not far from the school. After about a year, Walter’s aunty struggled to earn any money, and could no longer provide any food, clothing or even healthcare for young Walter. He started missing school and going out to the village to dig, so that he could earn a little amount of money. He would attend school at IGF from Tuesday to Thursday, and would go to the village to dig on Fridays and return on Monday.

“I would cook once a week and eat what I have cooked for the whole week, at some point, I developed problems with my stomach due to eating unfresh foods.” Walter explained. “When my aunty truly got tired of seeing me struggle, she advised me to go back to my parents in the village, but this time the road was blocked by the rebels. I was set to leave on a Monday and Mama Irene met me on her way to church on Sunday. I shared my sad stories with her and she asked me to come live in the Dorm with the other boys and girls who were already there.” Walter was 10 years old when he moved into the dormitory at IGF under the care of Mama Irene, it was 1994.

Walter was among the first students to sit the P.7 exams at IGF in the year 2000. It was during that year that Walter had a terrible accident which badly damaged his leg. Thankfully he recovered and was able to complete his studies. He performed well and joined nearby Kitgum Comprehensive College. When Walter was in Senior 3 class at High school (equivalent of year 9 in Australia), there was an accident which killed a young man who was studying Mechanics through IGF. Walter was chosen by Mama Irene to replace the young man in perusing Mechanics. “It was so heartbreaking to be moved to do trade but I had no choice since I was needy.”

Walter completed his trade in Mechanics and returned to IGF as a driver and mechanic working on IGF trucks and vehicles, and delivering goods and people to the different schools, and driving back and forth to Kampala. Walter was also a Sunday School pastor, a program controller in Christian Community Church, a Radio Presenter on Mighty Fire FM, and House Father to children living in the dormitories at IGF.

After 5 years working in the Transport Office, Walter transferred to the Procurement and Logistics Office. He successfully completed a Diploma in Purchasing and Supplies Management, and later joined Cavendish University. This year, on 20th April 2018, Walter graduated from Cavendish University with a Bachelor of Procurement and Logistics Chain Management.

Walter has been promoted to a Logistics Officer at IGF and after completion of his Degree, Walter is now part of the IGF management team.

Walter married his beautiful wife in 2014, and is blessed with a daughter (aged 7 years) and a son (aged 2 years). We are all incredibly proud of Walter for all that he has achieved, and for all he does in serving the next generation of vulnerable children at IGF. Congratulations Walter!